Eliminate Grains From Your Diet To Lose Fat & Improve Your Health

Eliminate grains from your diet in favour of vegetables, fruits, and nuts to lose fat and improve your health. The idea that everyone should eat grains is one of the biggest lies of mainstream nutrition. Don’t believe it!

A recent review of dietary grain intake made the following points that should convince you to consider eliminating grains:

• Eating a diet containing high in grains is associated with a greater risk of having a heart attack than eating a diet high in fat.

• Be aware that whole grains are not much better for you than refined and processed ones. Scientists found that “whole grain” is a weak discriminator in grain foods, “there being generally small differences between white and whole brown rice, pasta, and bread.”

• Most grains contain gluten, which a large portion of the population is intolerant of, or at the least, sensitive to.

• Although proponents of eating grains say you will miss out on nutrients or don’t get enough fibre without them, there’s no nutrient or ingredient that you can get from grains that you can’t get from a healthier food source. Some of the richest sources of soluble fibre are found in fruits, nuts, and green vegetables.

• Grain are an excellent source of phytic acid, which binds to minerals in the body prevents their absorption in the body—this is not a good thing! The high dose of phytic acid in grains can increase your risk of deficiency of magnesium, zinc, and iron, among other nutrients. 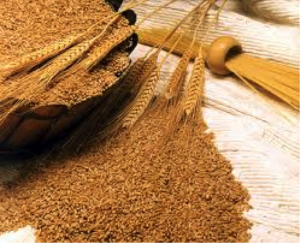 In terms of disease risk, an analysis of 135 research studies published between 2000 and 2010 found that when you compare diets high in refined grain products (cereal, bread, pasta, pastries) with those that are high in whole grains (cooked grains that are not refined), there is no significant difference. There is a trend toward eating less fruits and vegetables among people who eat lots of refined grain foods, which correlates with greater obesity, but eating lots of whole grains doesn’t provide much health or body composition benefit.

Of course, one of the few benefits of grains is that they provide an energy dense food source for people who are hungry in countries where malnutrition is a big problem. That doesn’t mean that you should be eating them too!

Fortunately, we have access to plenty of fresh animals and plants. To start avoiding grains in favour of whole foods, consider the following suggestions:

1) Eat fibrous fruits and vegetables, and avoid starchy ones. Green vegetables and dark coloured fruits are all high in antioxidants, fibre, and very low glycemic in the case of veggies and fairly low in the case of fruit.

3) Eat a variety of nuts, seeds, whole-fat dairy, and pasture-raised meat. Note that certain foods like quinoa and amaranth are seeds and not grains.

4) Use lettuce and other large green leaves instead of bread in “sandwiches.”

The Nutrition 101 on how to abs are made in the kitchen!

Get my $39 value
free ebook now

Continue without
your free $39 e-book

Enter your info below so we can send you...